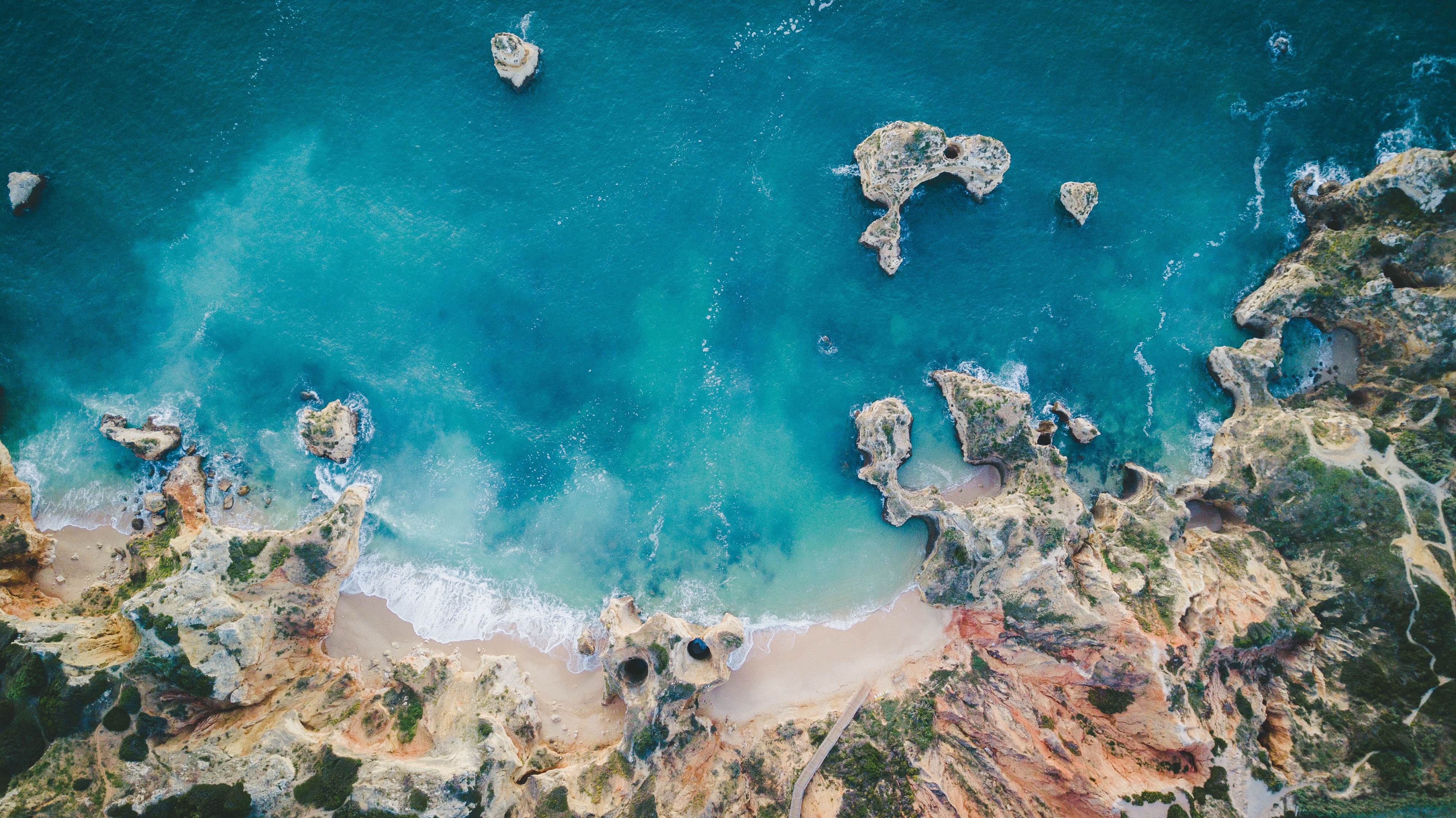 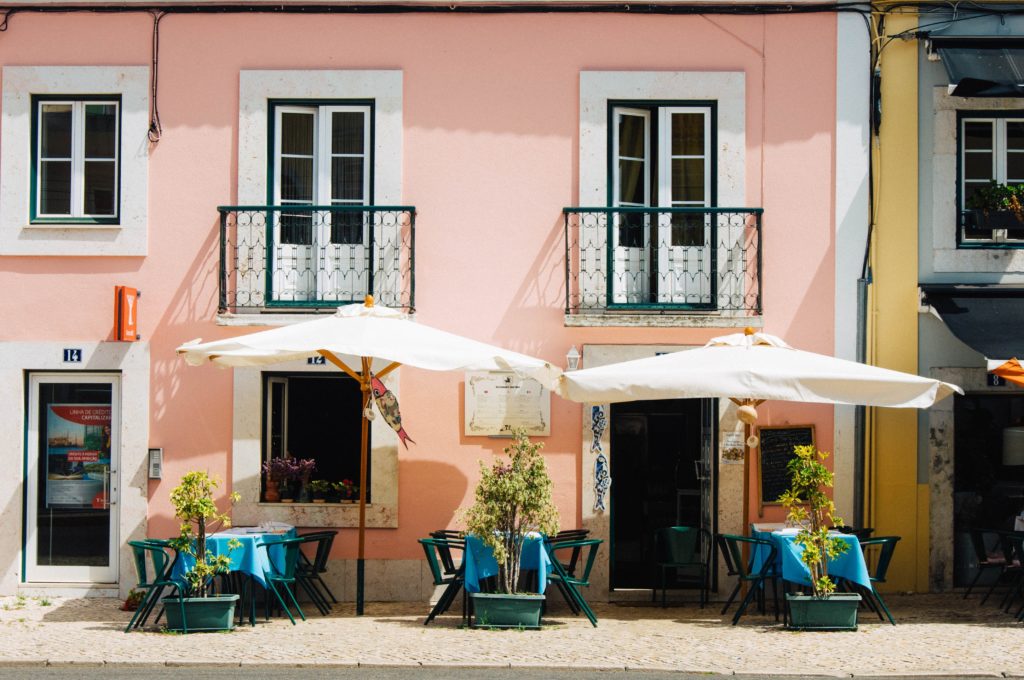 Travel to the Iberian Peninsula for a Portugal honeymoon. This small but mighty European country is known for its vibrant capital city, Lisbon, its wine region in Porto, pristine beaches in Algarve and an island paradise in the Azores archipelago. Honeymooners will delight in romantic wine experiences, hikes through lush landscapes on the islands, and relaxation on beaches not far from main cities. 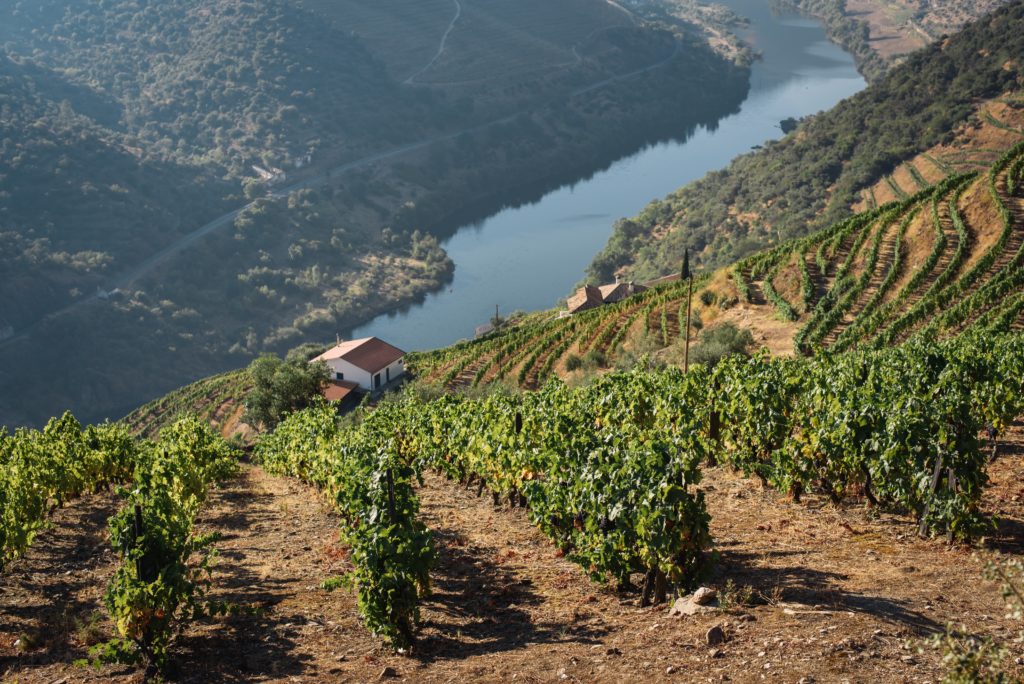 Portugal is part of the Iberian Peninsula in Europe. It is west of Spain and shares its northern border with the country as well. The Atlantic Ocean is to the west. The well-known Douro River is in northern Portugal, near Porto. The Tagus River, whose mouth is by Lisbon, is equally well known.

You could drive from the top of Portugal to the bottom in less than 8 hours. It’s a small country with miles of coastline, beautiful beaches and cobblestone streets dating back centuries.

The Azores are one of the best destinations in the country, off the west coast of Portugal. It’s about 1,000 miles from Lisbon and is an archipelago that consists of nine islands. Volcanoes have helped shape the beautiful landscape. Add a stop to at least one of the islands to your Portugal honeymoon itinerary. We recommend São Miguel for an amazing adventure together.

Rolling hills and great soil in northern Portugal have made viticulture strong over the centuries. Porto is world-renowned for its wines.

Lisbon is the country’s capital, and it’s a short day trip to other historical areas worth visiting, like Sintra, Cascais and Tomar. Algarve is also a popular destination—this southern region of Portugal is known for its attractive sandy beaches. 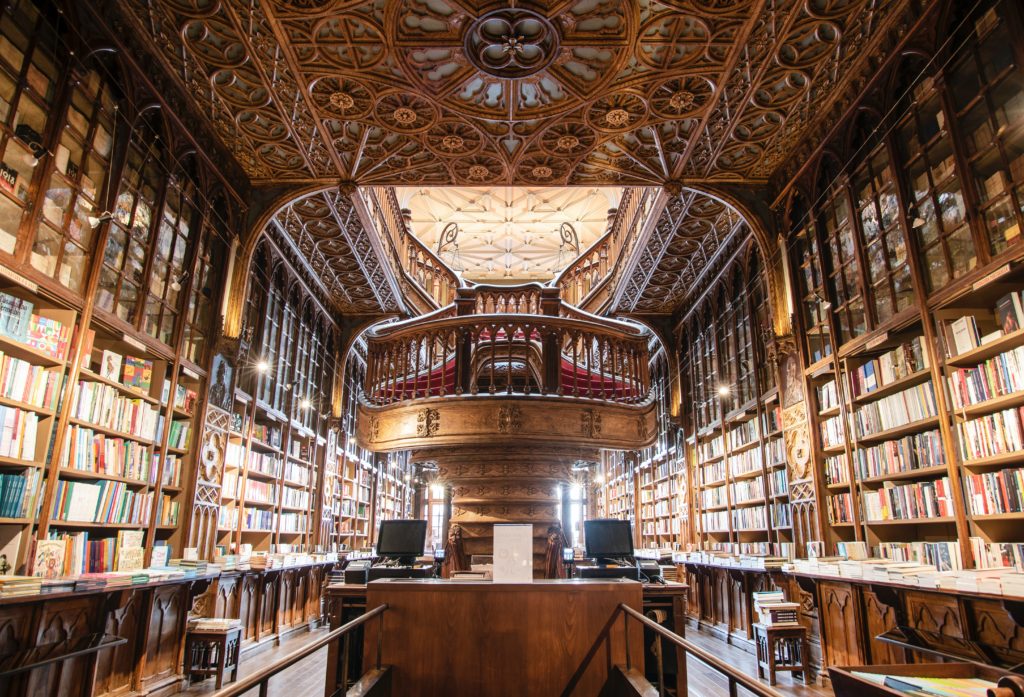 The Language of Portugal

Portuguese is the language spoken in this country. Though you’ll easily get by with English during your European honeymoon, it never hurts to know essential words in the native language. Brush up on Portuguese before you leave home and during your vacation.

There are two time zones in Portugal: one for mainland Portugal and another for the Azores. The time difference between the two of them is one hour. 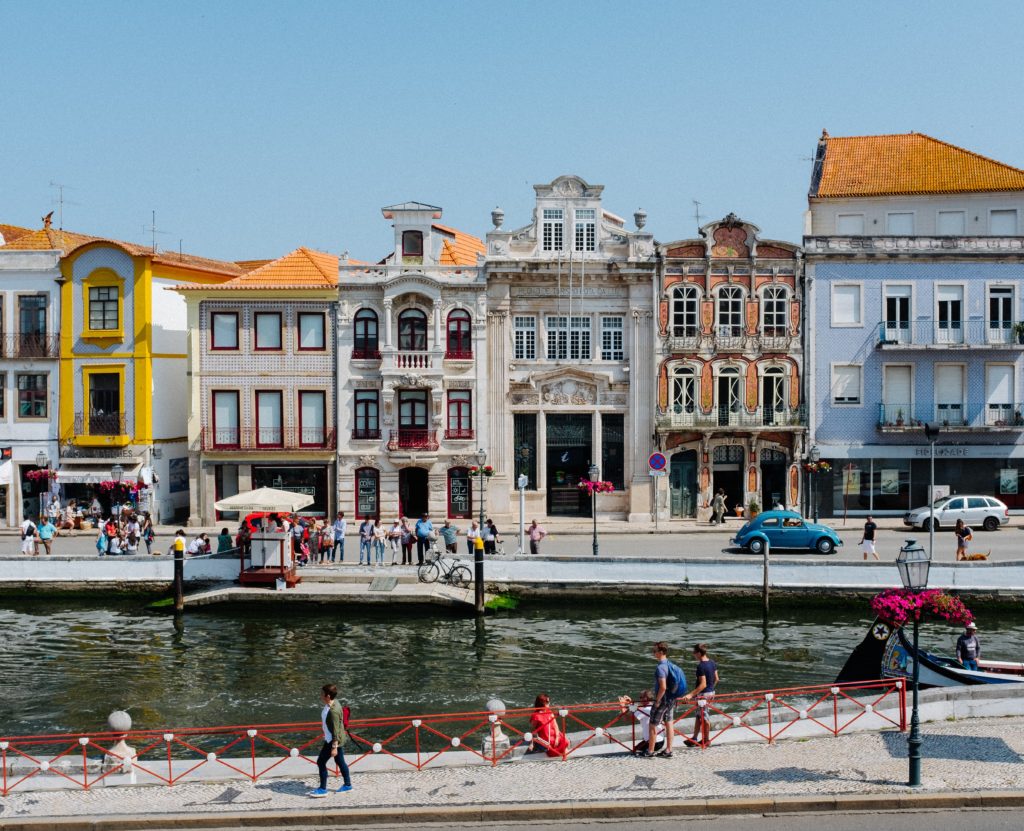 You’ll need Euros for your Portugal honeymoon. The conversion is approximately $1.22 USD to every Euro, but currency rates fluctuate. While it’s definitely good to have some cash on you “just in case,” credit cards are widely accepted in Portugal.

This is a progressive country when it comes to supporting LGBTQ+ rights. Gay marriage has been legal since 2010, and it’s been legal for gay couples to adopt children in Portugal since 2016.

Members of the LGBTQ+ community honeymooning in Portugal should feel welcomed and comfortable. If you’re looking for particularly gay-friendly neighborhoods in a city like Lisbon, visit the Bairro Alto, Principe Real or Arroios neighborhoods. 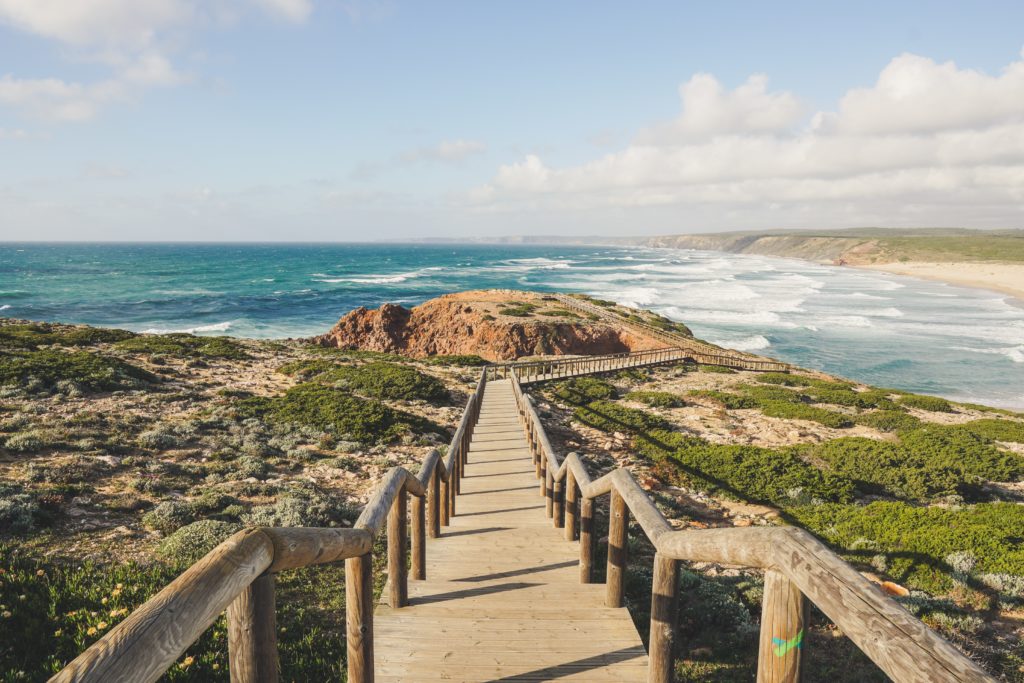 The summer months are some of the most popular times to visit this country. Travelers flock to Portugal’s beaches and enjoy picturesque vineyards in full bloom over summer.

If you’re looking for better prices on hotels and smaller crowds, however, shoulder season is a great option. This is around April to June, then again in the fall, from September to November.

In Lisbon, expect temperatures to be between 60º to 70º F from April through June, then between 73º and 57º F from September through November. July and August are the hottest months, with temperatures reaching an average of 74º F. Temperatures at the beach in Algarve can be about 10º warmer. 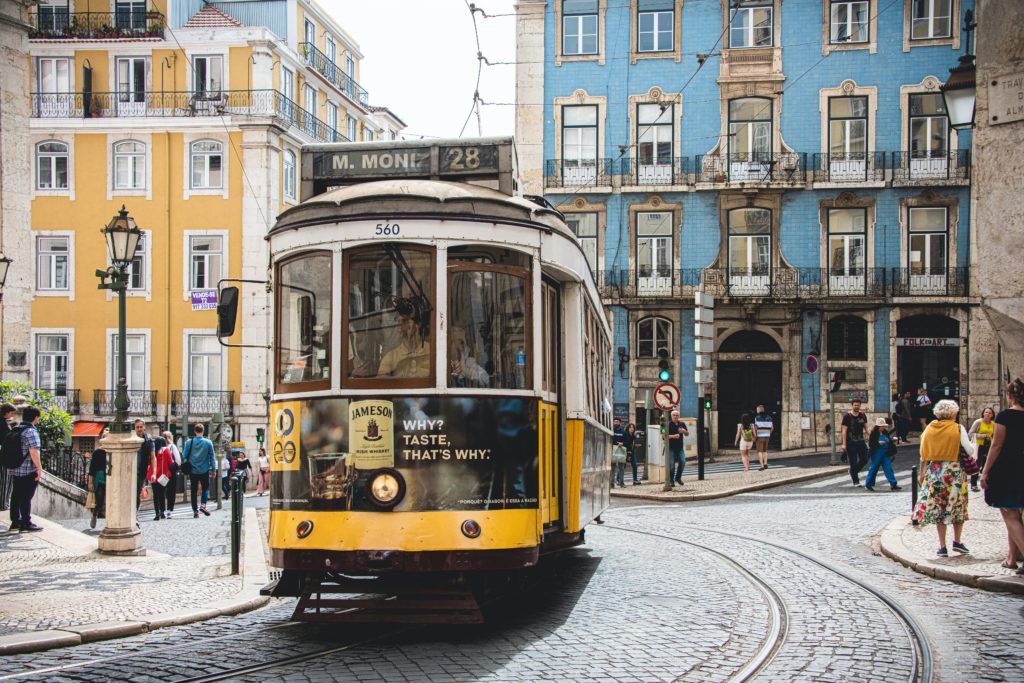 It’s easy to fly to Portugal from the United States. You can fly into several airports, including Porto and Faro, but the most popular is in Lisbon.

From the Lisbon Airport, you can take a train, drive or fly to other areas in Europe. The airport code is LIS. Here are sample flight times and cost from three major United States cities during the third week of September:

Once you arrive in Lisbon, it’s easy to get into the city via Metro or public bus, which takes a little longer than the train. If you take the Metro to Gare do Oriente—the city’s central train station and bus hub—you can easily connect to many other cities in Portugal.

You can also rent a car from the airport or take a taxi to your honeymoon destination. 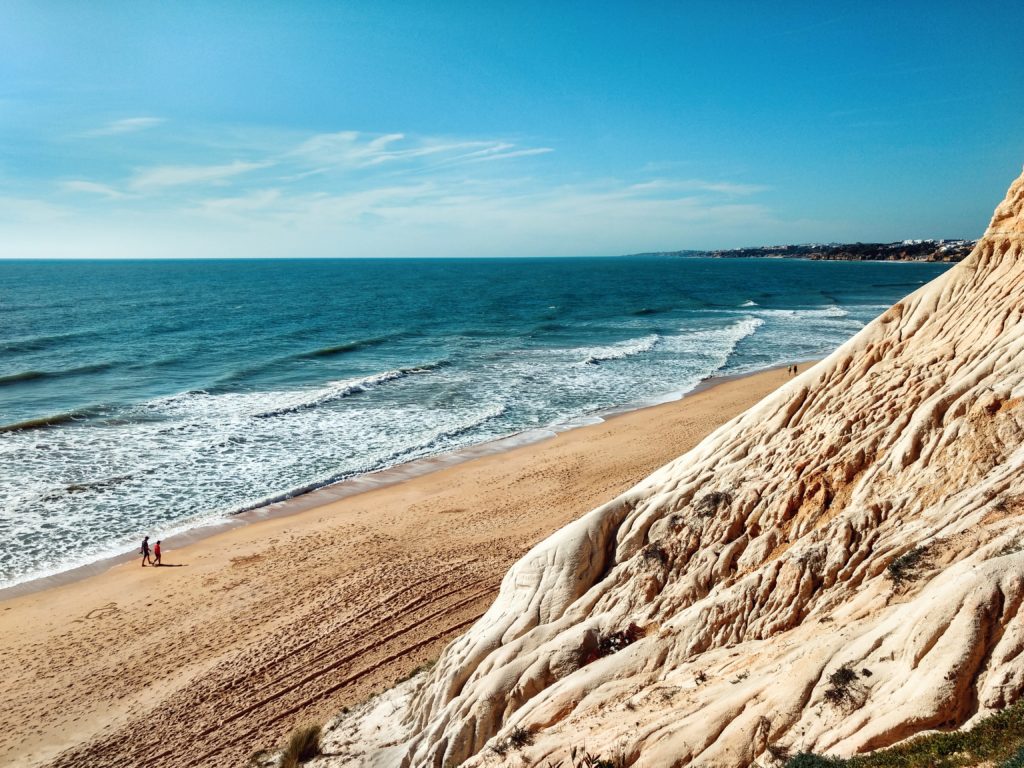 You’ll need a passport that’s valid for up to six months after your trip to travel here for your dream honeymoon. Visas are not required if you’re staying less than 90 days.

Routine vaccines are recommended for travel to Portugal. This includes Hepatitis A and B, Measles-Mumps-Rubella, Flu, Chickenpox, Polio and Diphtheria-Tetanus-Pertussis.

You must have proof of a negative PCR COVID-19 test taken within 72 hours before arriving in Portugal. It’s also necessary to fill out a Passenger Locator Card when traveling to Portugal. If you’re traveling to Madeira, an additional form is required. 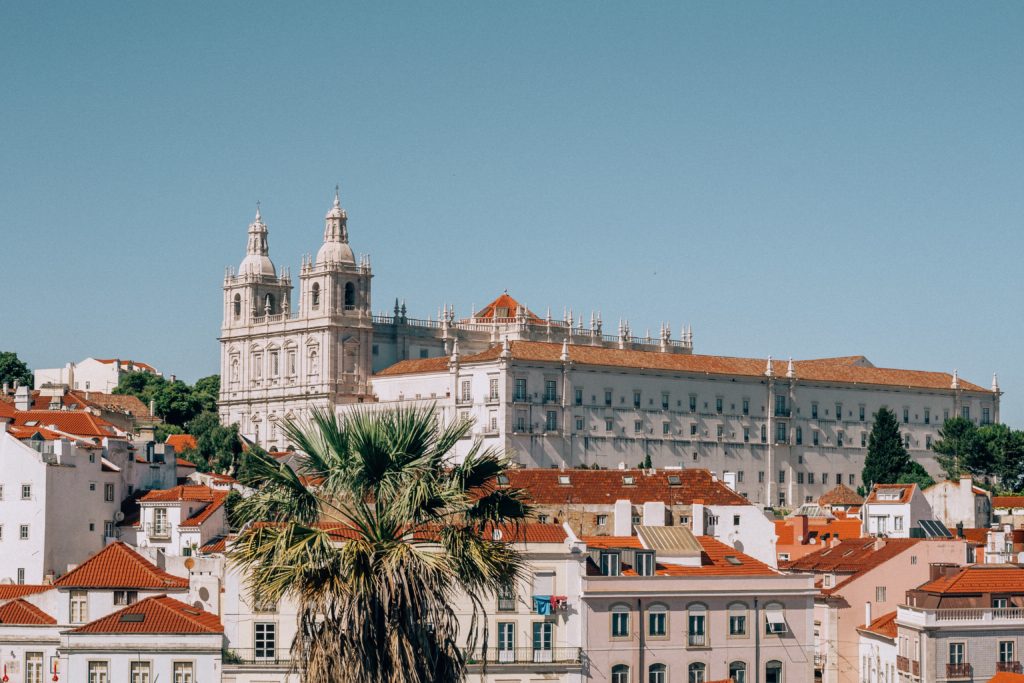 Things to Do on Your Portugal Honeymoon

There is a ton to do in Portugal, so we’ve broken down the activities into three areas: Lisbon, Porto and the Azores. 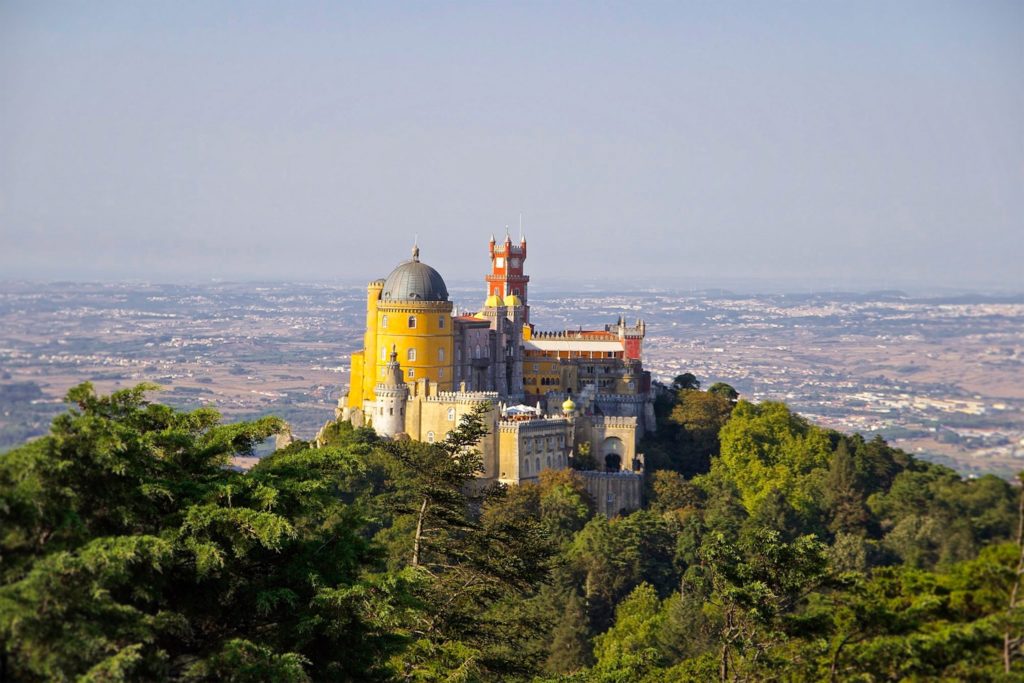 Things to Do in Lisbon

Portugal’s capital is filled with exciting areas and landmarks. 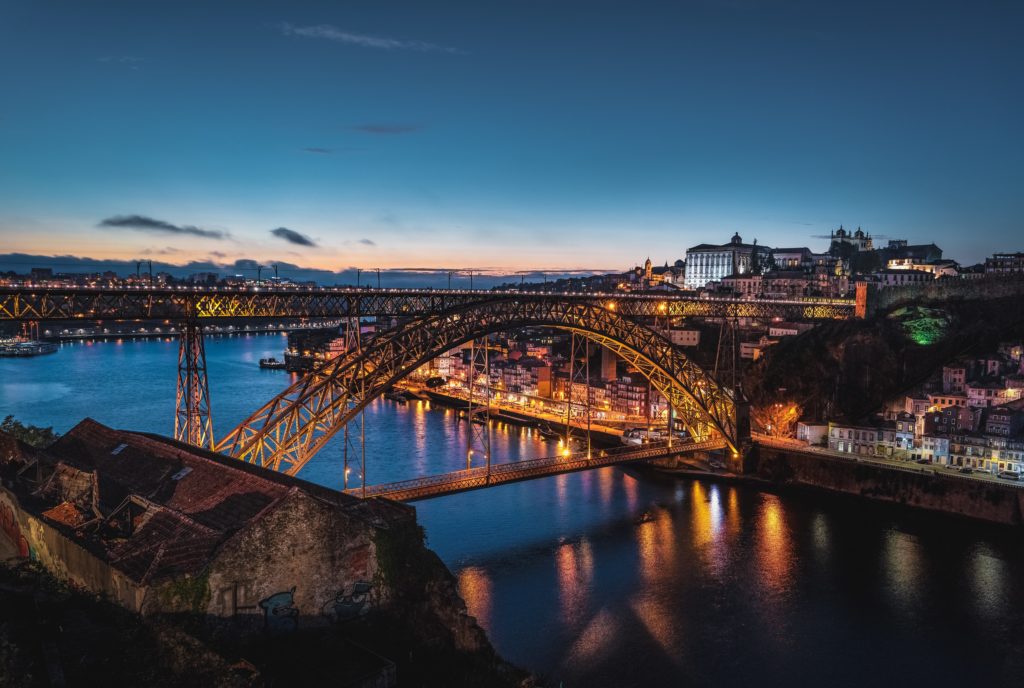 Things to Do in Porto

Porto’s main attractions are their wine and river valley. The area is amongst the best Portugal honeymoon destinations in the country. And it’s one of the best spots to taste wine, too. 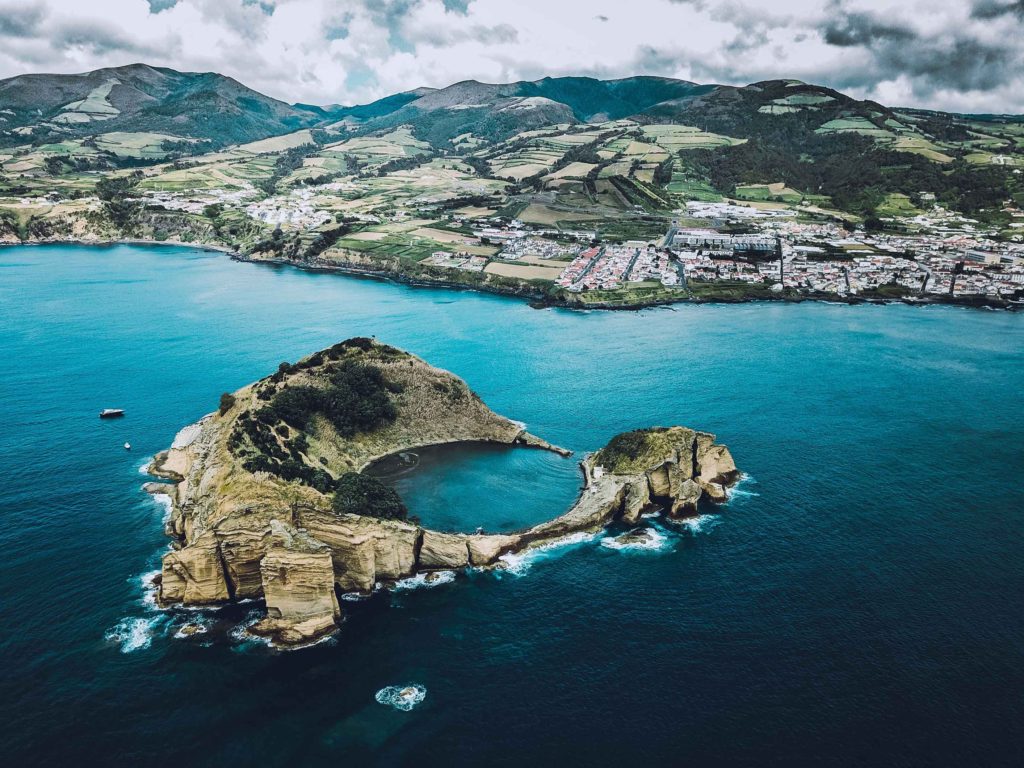 Things to Do in the Azores

The Azores are a natural paradise, famous for their volcanoes and hiking options. Your lively experiences with your spouse here will be filled with adventure amidst the dramatic, lush landscapes. 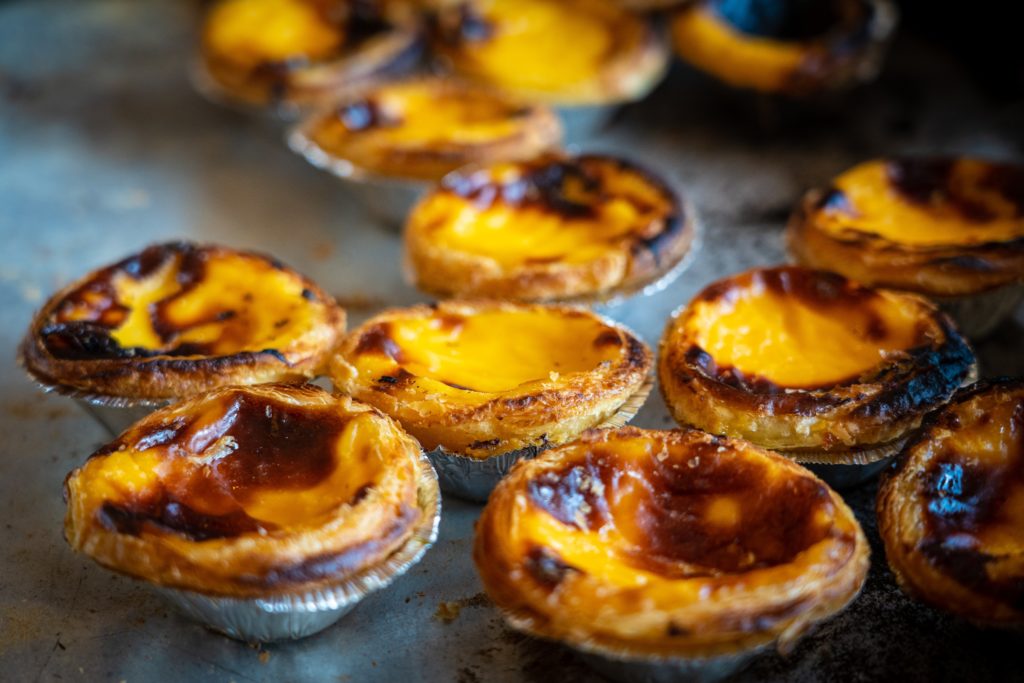 Food to Try During your Portuguese Honeymoon

What’s a honeymoon in Portugal without trying typical cuisine there? Seafood and sweets come to mind first when describing Portuguese food. Though Portugal has many specialties beyond what’s listed here, we want to mention three delicacies you should try: 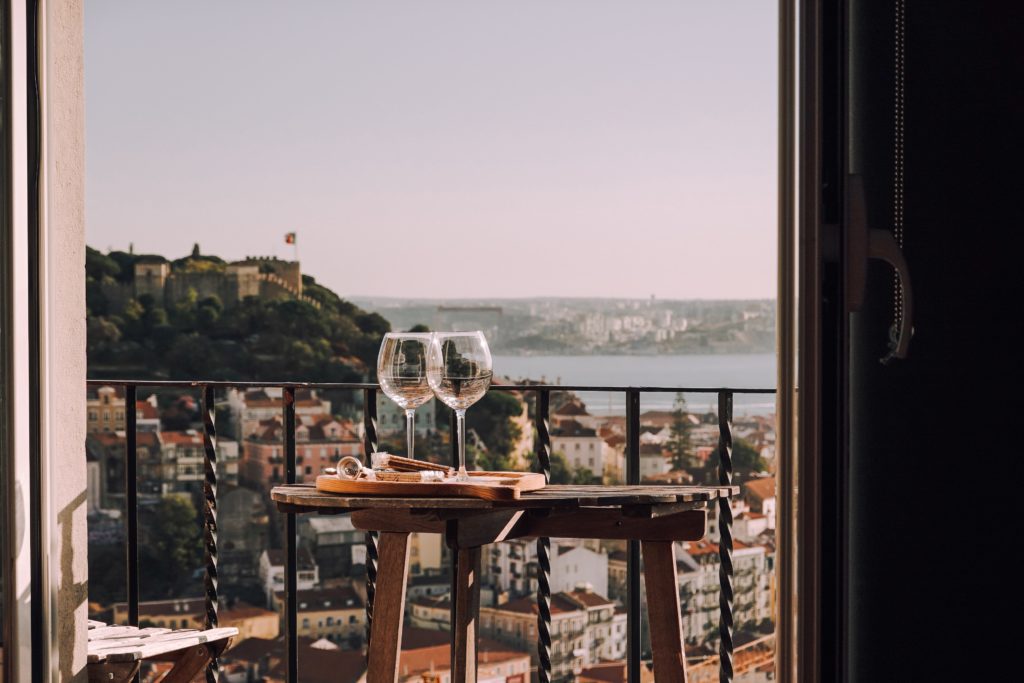 There are many options for hotels and accommodations in Portugal. There are popular hotel brands you know and trust, like Hilton and Marriott, Air BnBs, and bed and breakfasts.

Here are three suggestions in three different parts of the country: 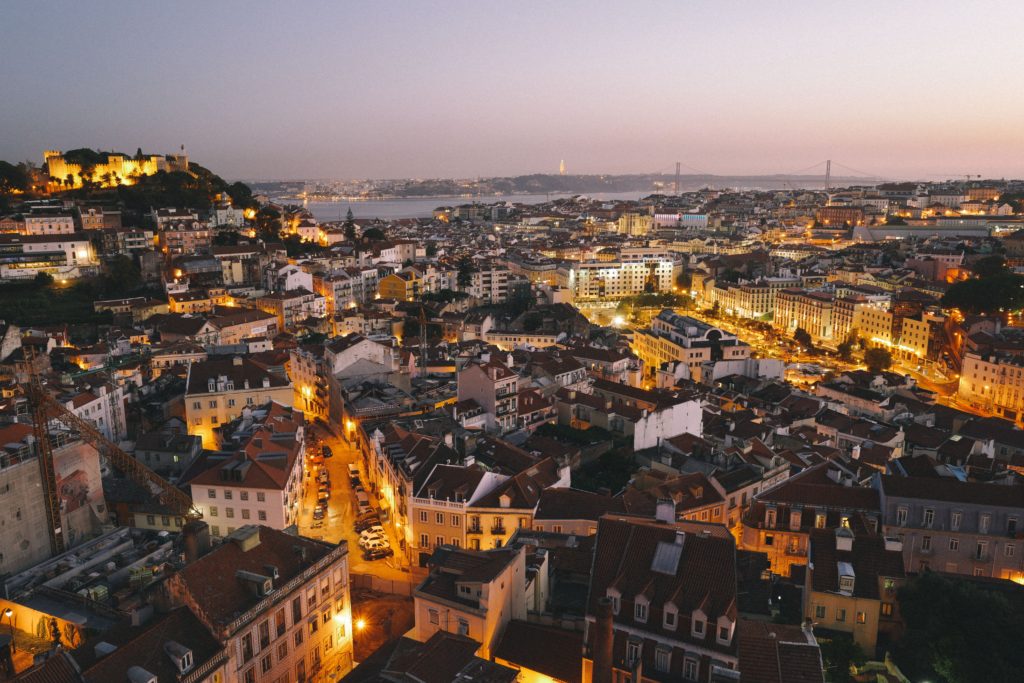 There are so many things to do across Portugal and the Azores, so you’ll want to maximize your honeymoon budget. Luckily, family and friends can gift you all kinds of memorable experiences. Register for a fabulous Portugal honeymoon resort, experiences in the Douro Valley, romantic dinners overlooking an Atlantic sunset and more with a Honeyfund honeymoon registry.