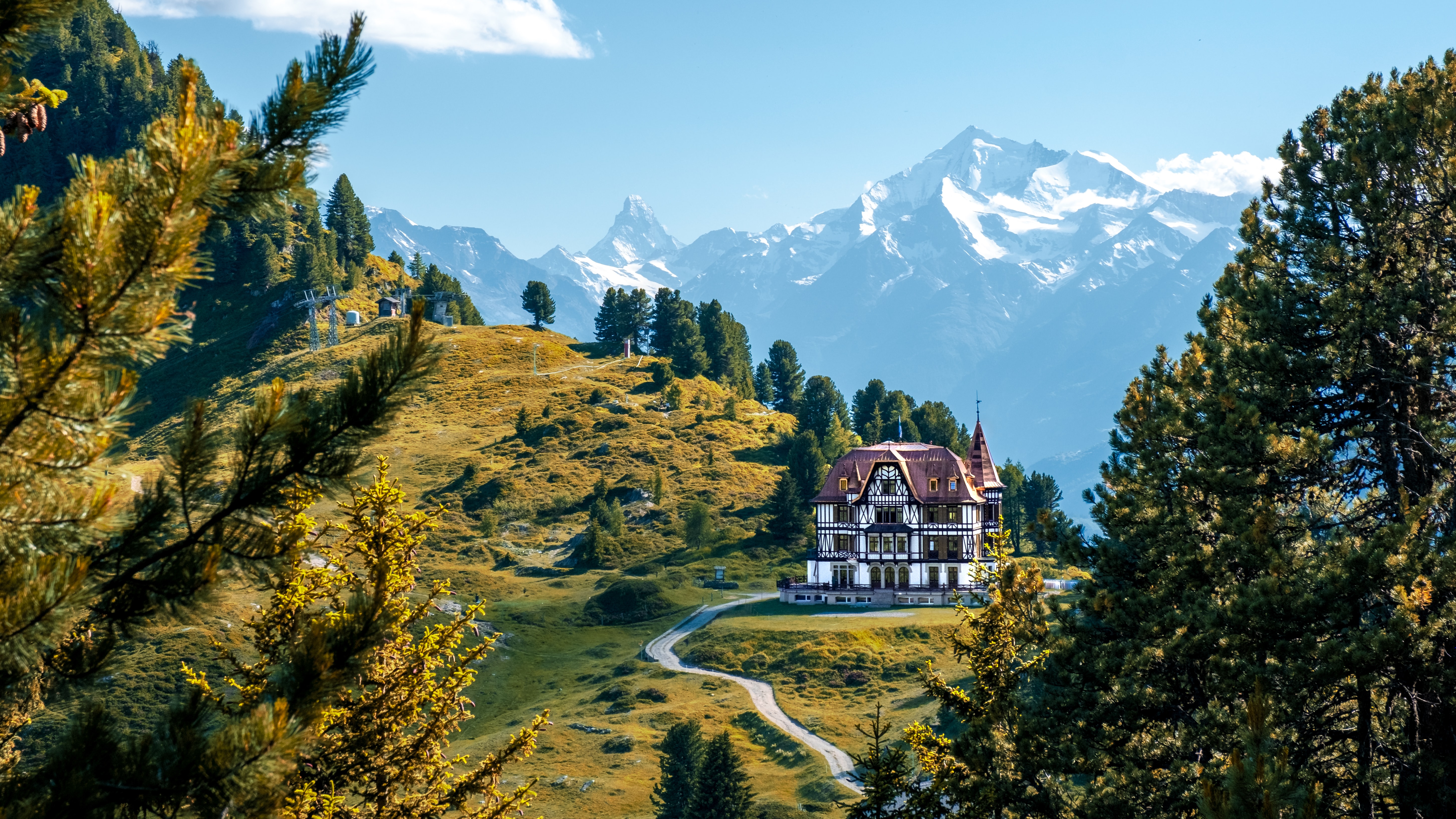 Adventure into the Majestic Alps on Your Switzerland Honeymoon

Embark on a memorable Switzerland honeymoon, a romantic destination with breathtaking landscapes and famous landmarks. Castles peeking out of snow-covered mountains and picturesque villages add to the natural beauty of this European country. Visit its charming attractions, scenic waterfront promenades on many lakes and rivers, its enchanting valleys and alluring mountain peaks. 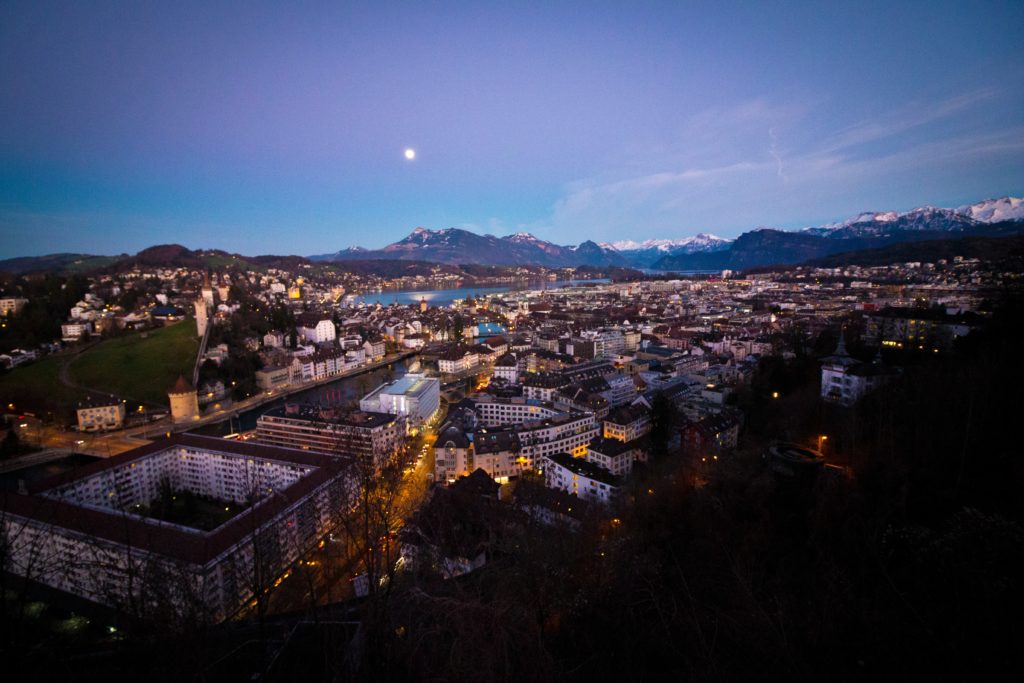 This landlocked country is defined by its Alpine mountains (and the highs and lows in its geography that go along with it), which cover over 50% of the country. It is bordered by Italy to the south, France to the west, Germany to its northeast, and Liechtenstein and Austria to the east.

You’ll often see Switzerland abbreviated as “CH,” which stands for Confoederatio Helvetica (Swiss Confederation). This stems from the time when Switzerland was formed in the 13th century by political subdivisions called cantons. Today, the small country is divided into 26 cantons.

Many major rivers start in Switzerland, namely the Rhône and the Rhine. They meet in the Swiss Alps. The snow-capped mountains of this area are famous for their beauty and world-class skiing. They are also renowned for “The Matterhorn” mountain, an icon of Switzerland. 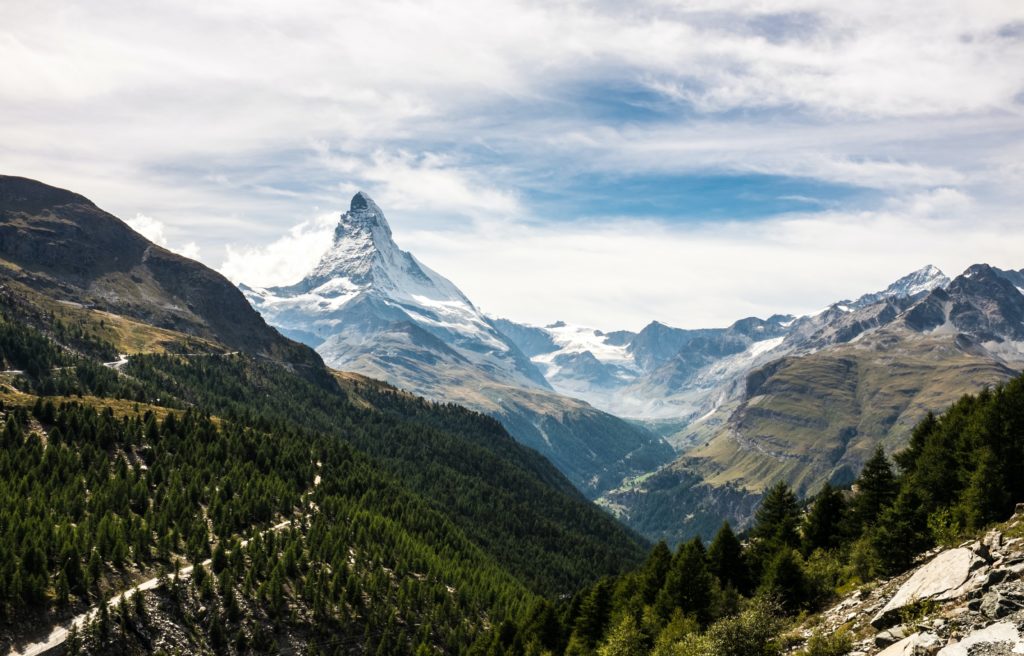 Here are three major cities in Switzerland and what each is known for:

Zurich: This is the country’s biggest city and perhaps one of the world’s wealthiest. It’s famous for its art galleries, restaurants, cafes, and high-end shopping. Be sure to take a romantic walk along Lake Zurich while there during your Switzerland honeymoon.

Lucerne: This destination in central Switzerland (just 40 minutes from Zurich) is known for its storybook fairytale-like medieval old town. The colorful medieval architecture is set against the astonishing Lake Lucerne.

Geneva: This city is amongst popular Switzerland honeymoon destinations, with its charming cobblestone streets in the old town neighborhood. Its location is far west in the country, as it reaches towards France. It is the second most populated city in the nation and is home to Lake Geneva. The city center has Jardin Anglais, a garden that is undoubtedly one of the notable romantic places to visit in the city, well known for its flower clock. 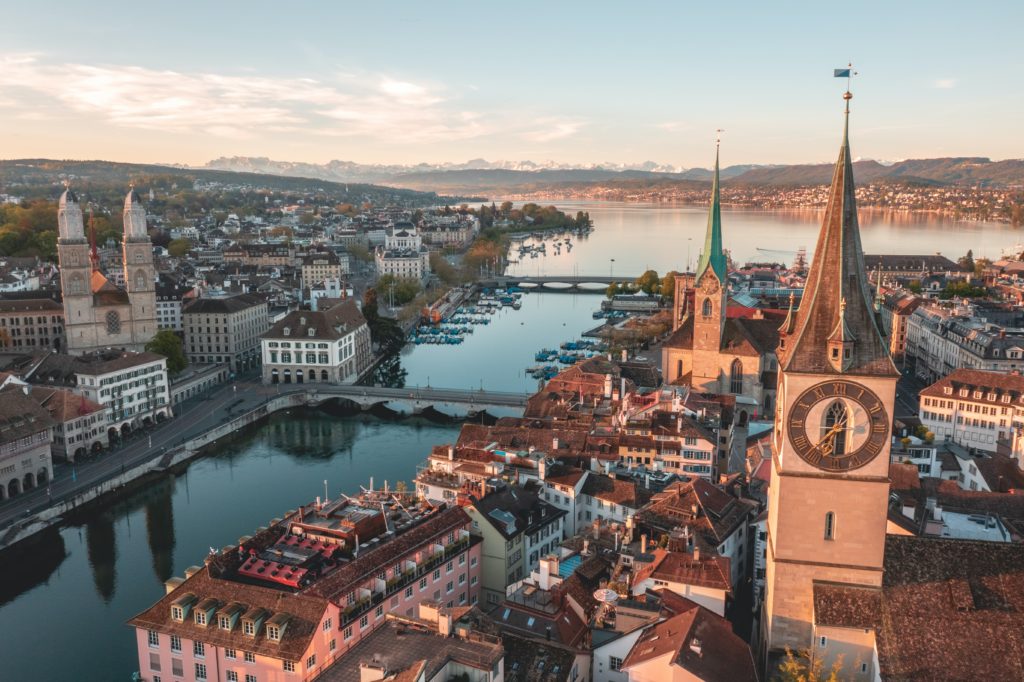 Switzerland is a unique country when it comes to languages: it recognizes four national languages. These are German, French, Italian and Romansh, mainly with a Swiss vernacular. German is spoken most widely out of the four. However, you’ll find people who speak English, in addition to their native language, all over the country.

Switzerland is a small country, and it’s all in one time zone. It’s on Central European Time, and they observe Daylight Savings Time. If it’s noon in New York, it’s 6 pm in Zurich, Switzerland, and it’s 9 am in Los Angeles. 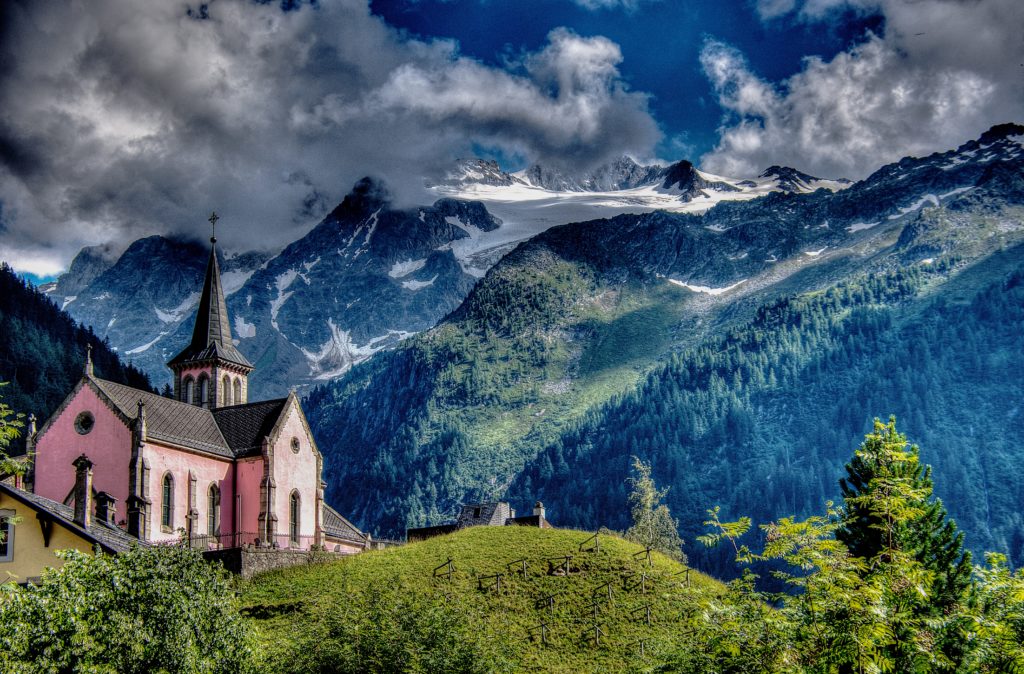 Switzerland has been making strides towards equal rights for the LGBTQ+ community in the past decade. Legislation to allow same-sex marriage was passed in December 2020, and is subject to a referendum in September 2021. Public opinion strongly supports same-sex marriage.

Gay couples should feel welcome in urban centers like Zurich, Geneva and Basel, especially, where gay bars and clubs can also be found. Geneva and Zurich have annual Pride festivals, as well.

Discretion is recommended when traveling to small towns in Switzerland, as the mindset there may not be entirely caught up to the progress of large cities. 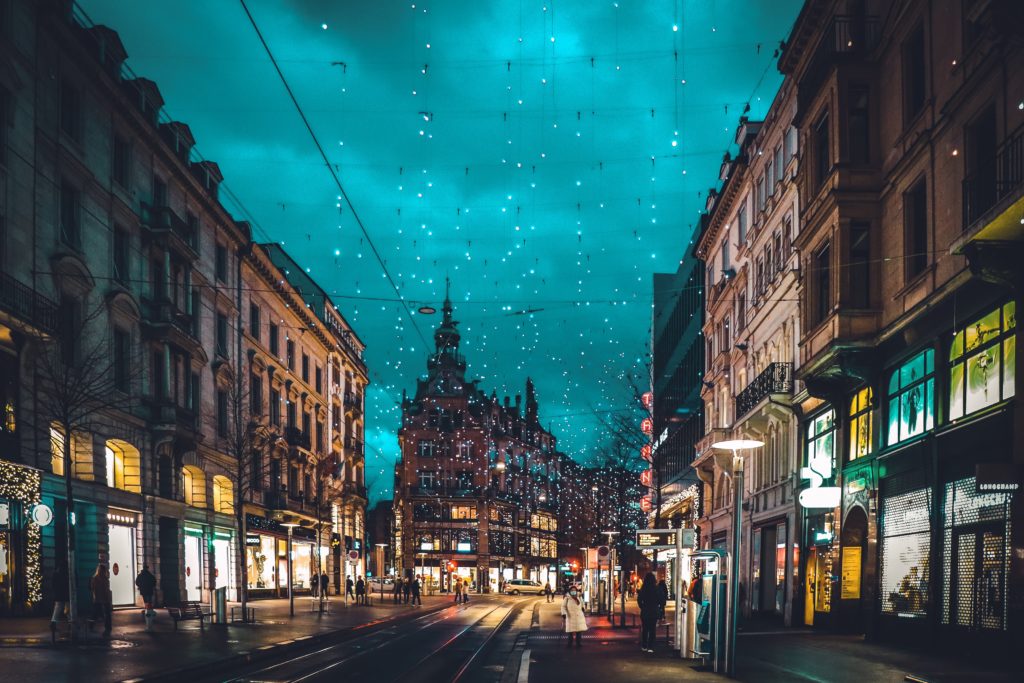 There’s never a wrong time to take a honeymoon in Switzerland. It just depends on what you want to do during your Switzerland honeymoon. In winter, you can enjoy skiing, winter sports, and picturesque, snowy landscapes. In summer, you can hike or simply enjoy the sunshine as you sip cocktails on a landscaped terrace. No matter the season, the views are incredible. 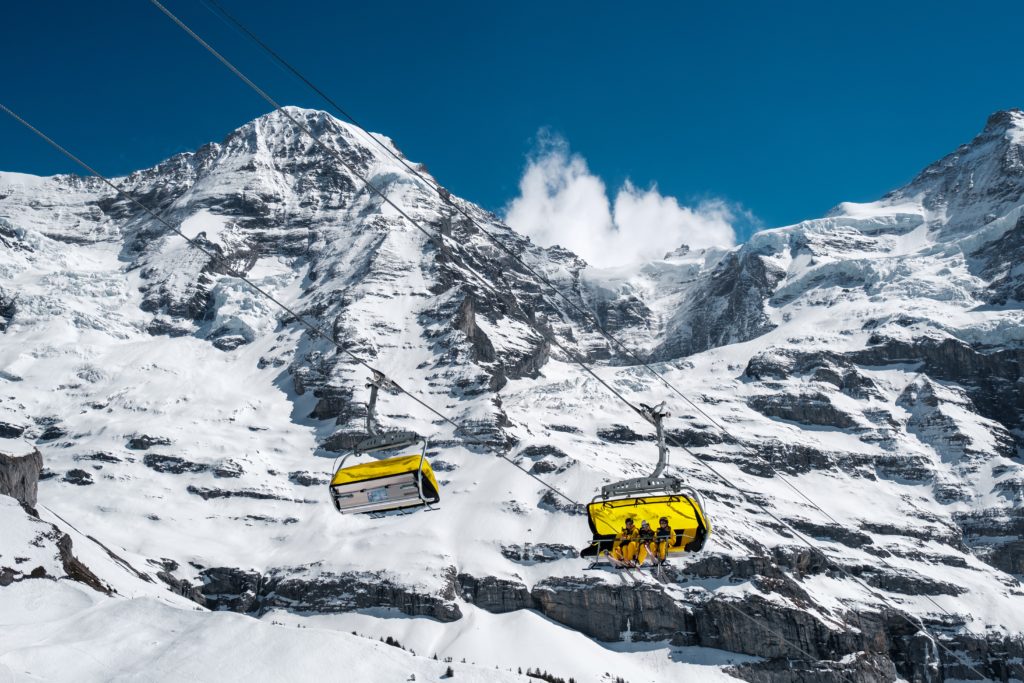 As with any honeymoon destination, you should consider going in the shoulder season if you want to save some money. For a Switzerland honeymoon, this would be ideal in September, after summer’s tourist season, but while the weather is still lovely. If you wish to go to Switzerland to partake in winter sports and activities, consider going January through mid-March. 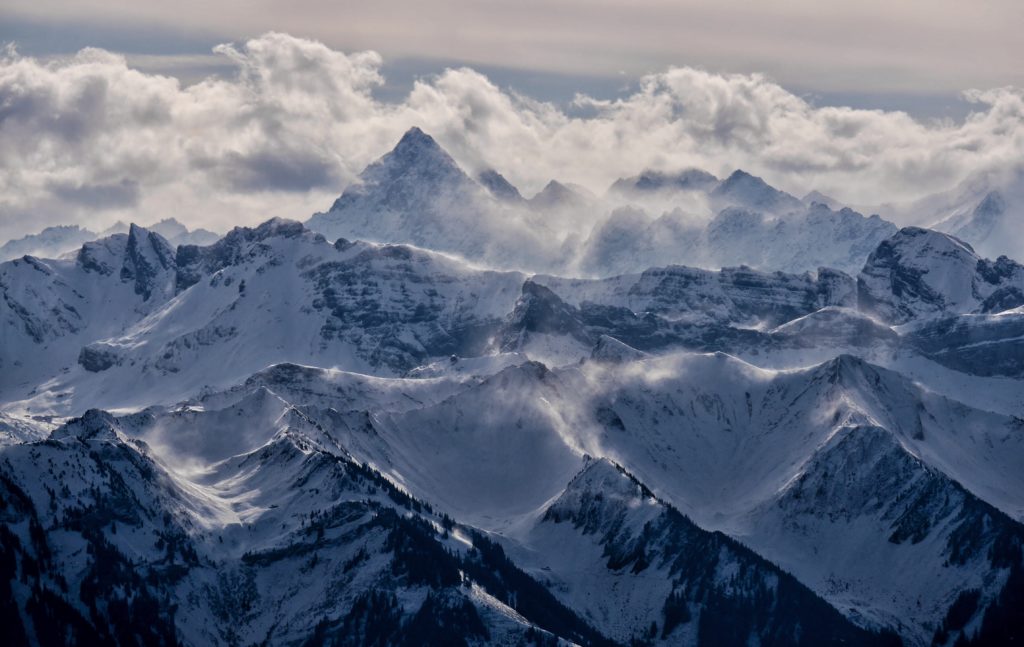 Getting to Your Switzerland Honeymoon

Flights to Your Romantic Honeymoon in Switzerland

NYC to ZRH: nonstop flight just under 8 hours for $580

Suppose you start a trip at one end of the country (perhaps north, like Zurich) and end up traveling to Geneva, located in the western part of the country. In that case, you may want to consider flying back home from the Geneva Airport. 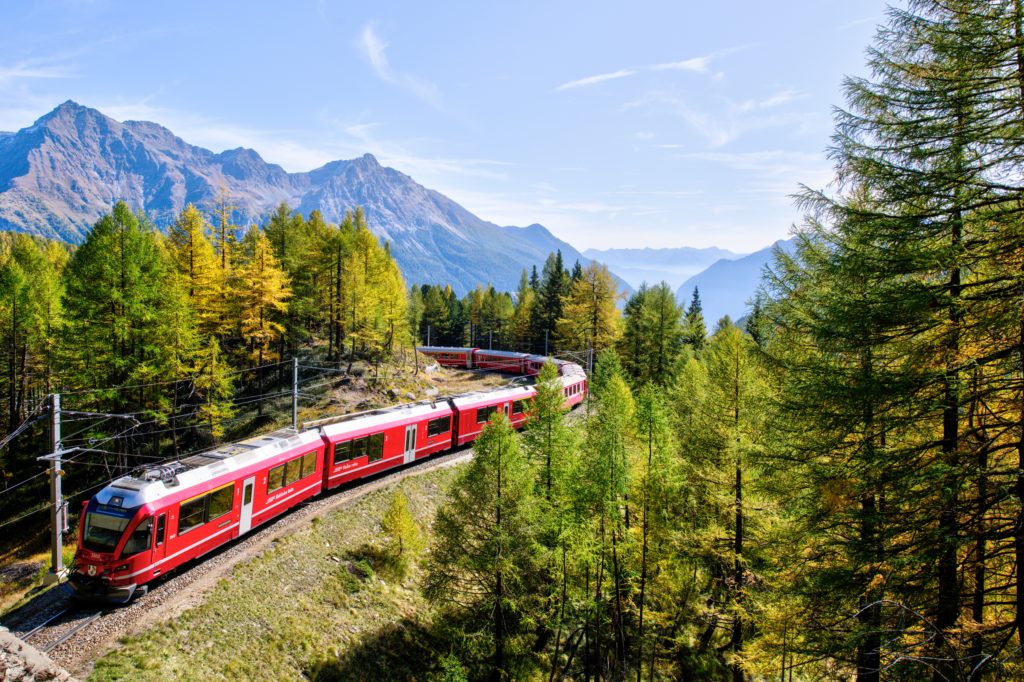 You can take public transportation from the airport to get to the city and surrounding areas, whether a train, tram or bus. Renting a car is always an option, which will allow you to stop at charming Swiss towns along your journey. (FYI, the Swiss drive on the right side of the road.) 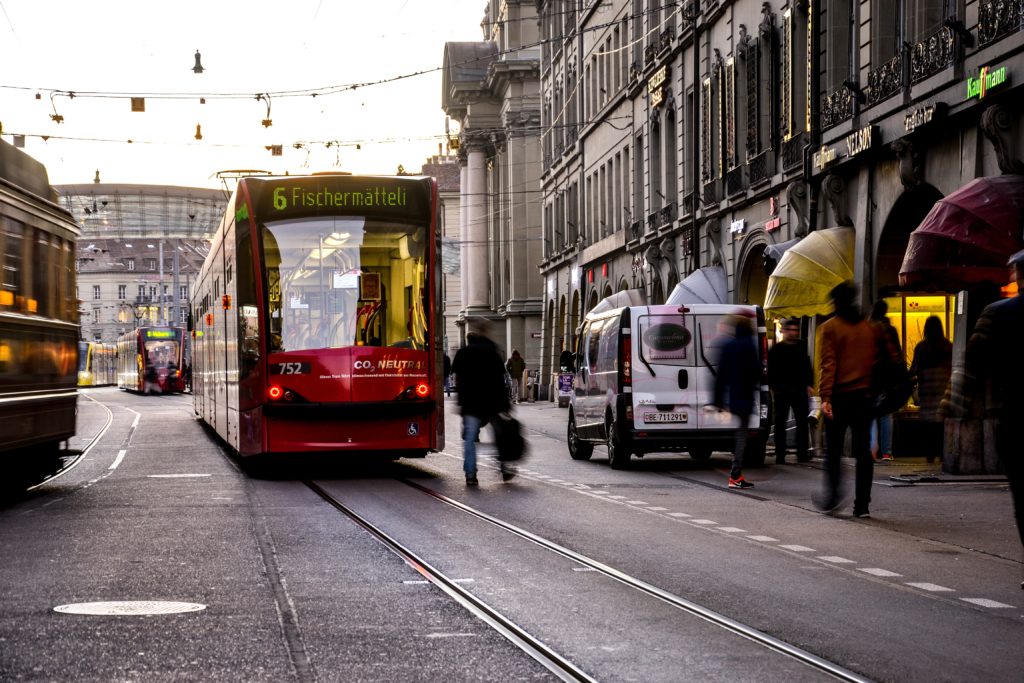 Routine vaccinations are recommended if you’re going on a Switzerland honeymoon, including Hepatitis A and B, Polio, the Flu, Measles-Mumps-Rubella, and Chickenpox. 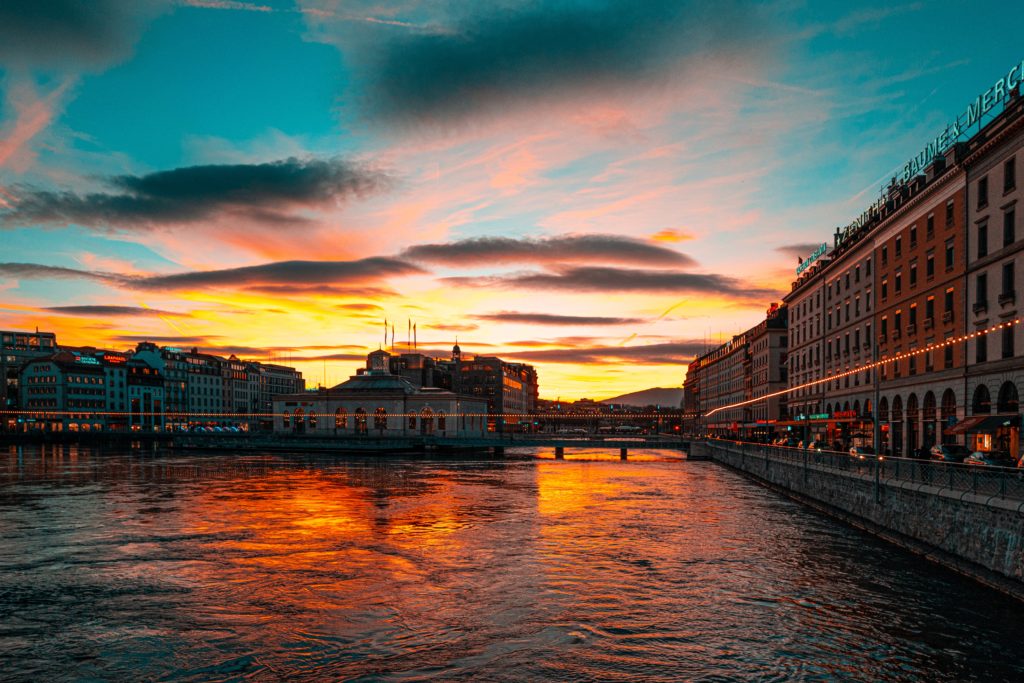 Where to Stay/Resorts on Your Switzerland Honeymoon

These honeymoon resorts are suggestions of where to stay in various locations throughout the country. They’ll provide memorable escapes for your Switzerland honeymoon.

Zurich: If you’ve dreamed of staying in a 5-star, deluxe luxury resort in Zurich, then try the Dolder Grand. It’s located just on the city’s outskirts, but its architecture is divine (and very castle-like, with modern interiors). For something within the city’s heart, try a boutique hotel, like La Réserve on the water. It is within walking distance to local attractions, including the Opera House, which is just five minutes away.

Interlaken, which is between Zurich and Geneva, has Victoria Jungfrau Grand Hotel & Spa Hotel. This hotel is worth noting if you really want to treat yourselves to a luxury resort experience during your Switzerland honeymoon. It has an onsite spa and several dining options, including outside on their terrace overlooking Switzerland’s incredible mountains.

Lucerne: For something fun, stay at the art-deco Hotel Montana, with their beautiful rooftop bar overlooking the city. Another option is Ameron Luzern Hotel Flora, a fantastic choice that is very close to the Lucerne train station. 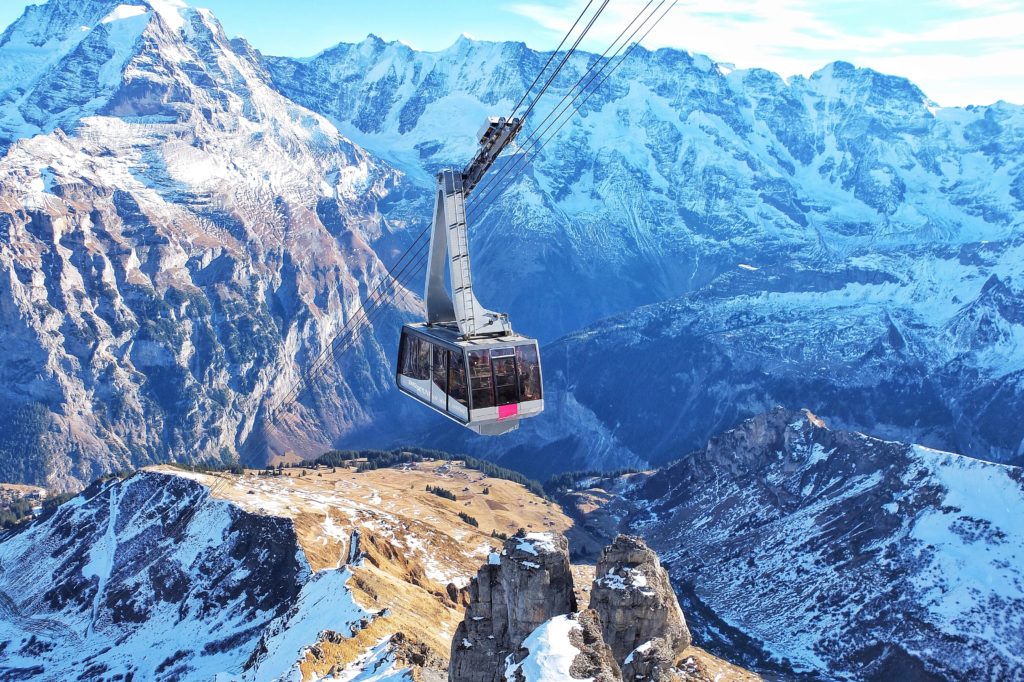 Things to Add to your Switzerland Honeymoon Itinerary

Get a 360-degree view from Matterhorn Glacier Paradise: This cable car ride allows a full range of views from the clear sides of the cars that take you through several mountaintops. The summit has a restaurant, cinema and viewing platform.

Take a boat ride around Lake Lucerne, Lake Brienz or Lake Thun: These lakes are beautiful, and there’s more than one way to see them. Get on the lake with a boat ride for a unique perspective, especially of the land you’ve been exploring during your Switzerland honeymoon.

Make reservations at a restaurant for a romantic dinner or lunch, like the picturesque Ascher Restaurant (Aescher-Gasthaus am Berg). This famous landmark was built into the side of a cliff in the 19th century, and it’s a one-and-a-half-hour drive from Zurich. Don’t forget to try fondue, a Swiss classic, while you’re on your Switzerland honeymoon. 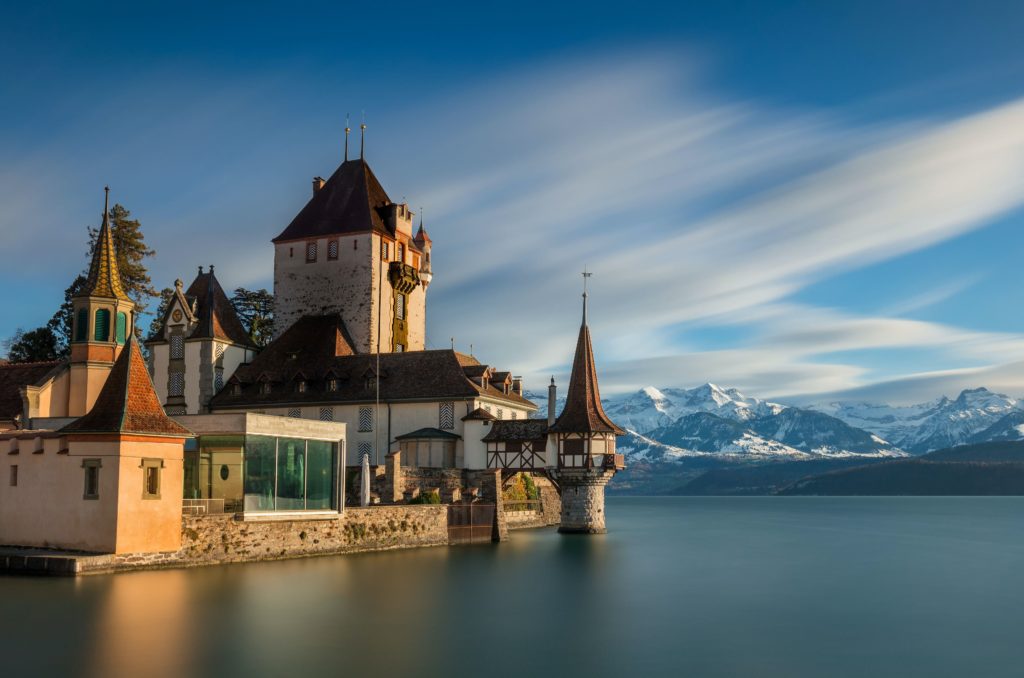 Visit castles in neighboring Geneva towns: Take a day trip to see the castles in Lausanne and areas around Lake Geneva for the day—or multiple days. There is Chateau Saint-Marie, Chillon Castle, Oron Castle—the list goes on.

Ride the GoldenPass train line: Besides offering gorgeous panoramic views of the Swiss countryside, this is an excellent way to get from Lucerne to Interlaken. 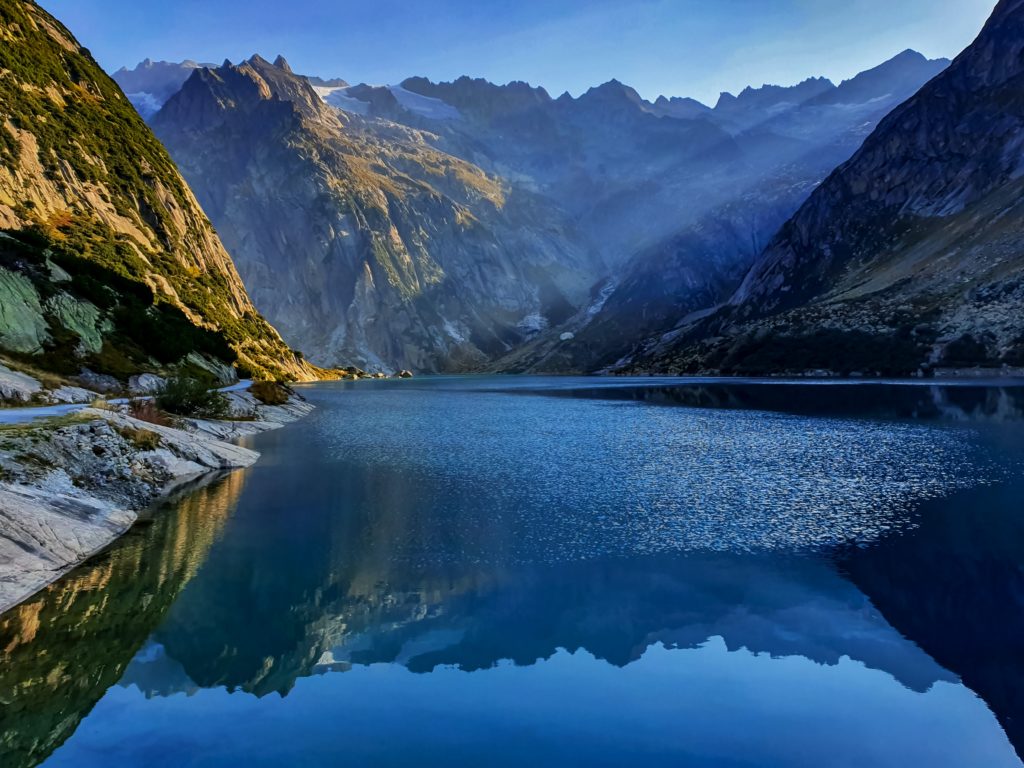 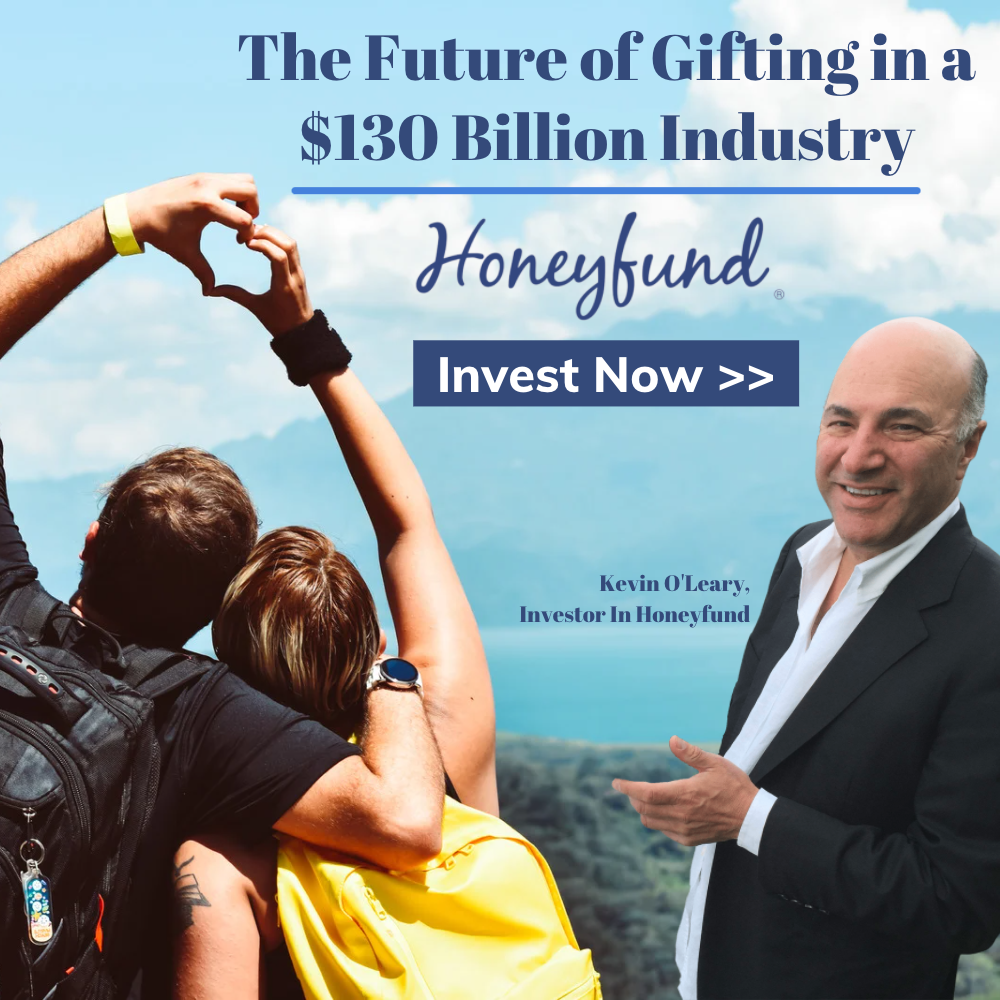