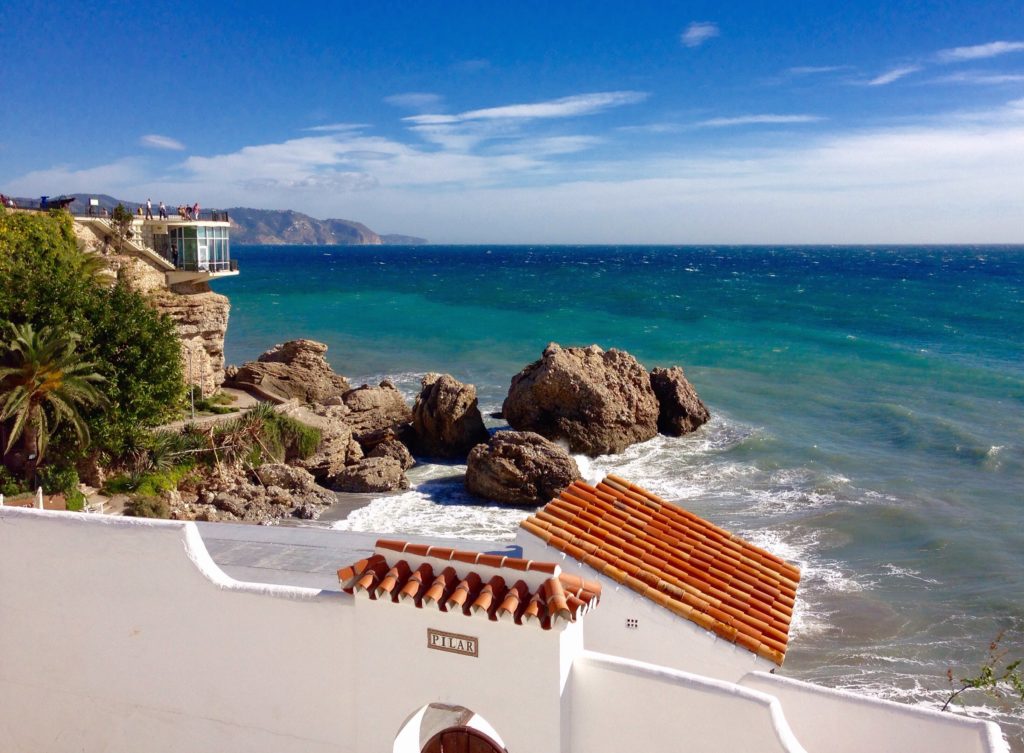 A honeymoon in Andalusia may be the best getaway for newlyweds who enjoy areas rich with a long history and popular destinations on the coastline. The region is brimming with great cultural attractions in its various cities, excellent food and plentiful beaches.

Andalusia is in the southern region of the Iberian Peninsula, which is the landmass that Portugal and Spain occupy. It’s the perfect destination for couples who perhaps want to enjoy European sightseeing and days on the beach.

The area consists of eight provinces, whose most popular cities include:

This southern European honeymoon destination is just across the water from the northern part of Africa, and the nation of Morocco. Spain’s western neighbor is Portugal, which is incredibly close to Andalusia. The Atlantic Ocean and the Mediterranean Sea share Andalusia’s coastline.

Though it may be obvious to pair a honeymoon to this area with other regions or cities in Spain, like Barcelona in the northeast, or Basque country in the north, consider destinations in Morocco and Portugal as well.

In Spain, you’ll see “Andalucia,” spelled with a “c” instead of an “s,” which is the Spanish spelling of the word. Spanish is the official language in the area.

Time Zone to Know for your Honeymoon in Southern Spain

Andalusia’s time zone is European Central Time. It is six hours ahead of New York City and nine hours ahead of Los Angeles. If it’s noon in California, it’s 3:00 pm in New York and 9:00 pm in Andalusia.

Spain’s Currency for your Andalusia Honeymoon

Spain is part of the European Union, and their currency is the Euro. Exchange rates between USD and Euros fluctuates, but $1.o0 converts to approximately €0,80. Major credit cards are widely accepted all over Spain, however, including cities in Andalusia from Seville to Cadiz, Costa del Sol, Granada, Cordoba and Malaga, and beyond.

Andalusia and the LGBTQ+ Community

Spain was an early supporter of gay marriage, legalizing it at the turn of the 21st century.

You’ll find gay scenes, including gay bars and clubs, in all areas of Andalusia.

Traveling to your Honeymoon Destination in Southern Spain

We are not suggesting travel during the pandemic. Planning ahead for a future honeymoon to Europe, in late 2021 and beyond, is suggested.

Americans are not currently permitted to enter Spain.

Be prepared with a valid passport that’s good for three months after your return home. You don’t need a visa to visit Spain unless you’ll be there for more than 90 days. And you won’t need any special vaccinations to visit.

Flights to Andalusia (and Seville)

There are two international airports to fly to in Andalusia. One is in Malaga and the other is in Seville.

Which airport you fly to depends on flights schedules and the area you want to reach in Spain to begin your Andalusian honeymoon.

The Seville Airport code is SVQ. (It’s also known as the San Pablo Seville Airport.)  We researched flights for the first week in November from three major US cities:

The Malaga Airport is another international airport in Andalusia (code: AGP). Here are the prices and length of travel for flights during the first week of November:

Food in Spain is delightful! There’s something for every palate and appetite. This includes tapas bars, offering small bites of local favorites, like sardines, Spanish tortillas or thinly sliced aged Iberican or Serrano ham. Or restaurants offering traditional Andalusian cuisine, including dishes like Salmorejo or Flamenquin.

Salmorejo is a delicious cold soup that’s traditionally created from a pureed mix of tomatoes and bread.  It’s Andalucia’s own version of gazpacho. And Flamenquin is a meat and cheese dish. The two ingredients are typically rolled together then breaded, fried and served hot.

The region is also known for its goat’s milk cheeses, with milk sourced from goat farms in the Andalusian hillsides. Olive oil is a staple in the cuisine here as well. You’re even able to visit olive groves in southern Spain for a fun honeymoon excursion.

Don’t forget to try some Andalusian wines or Spanish Cava, which is a sparkling wine like Prosecco or Champagne. You’ll see sangria on restaurant menus throughout the region as well. 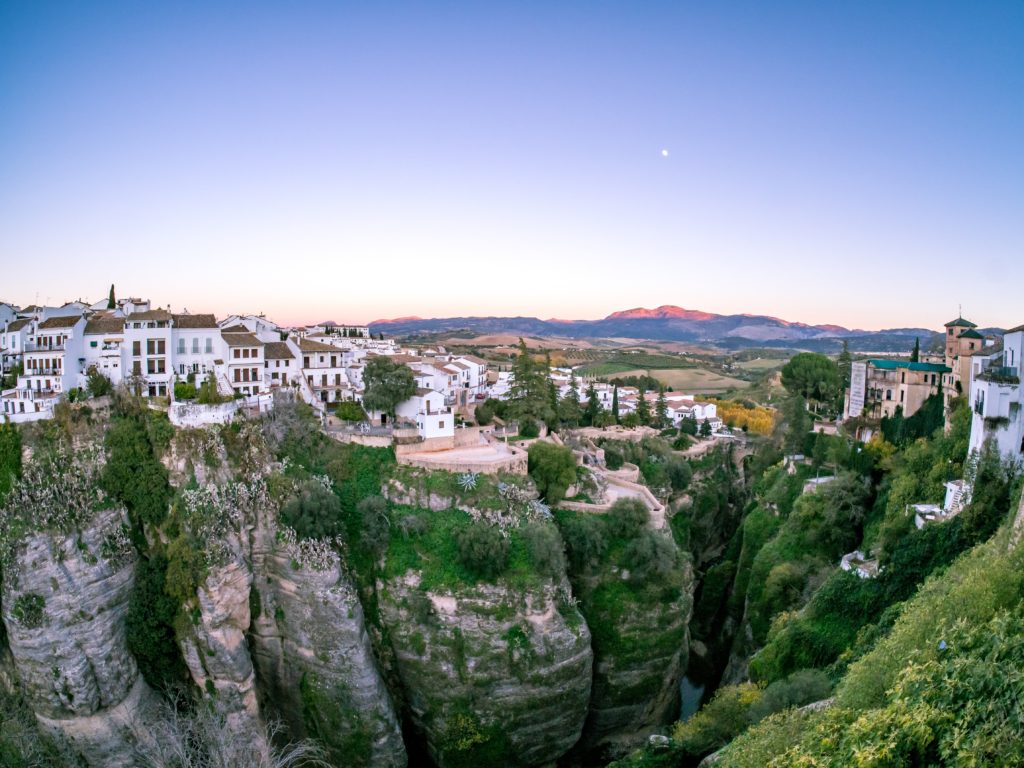 Things to do in the Different Areas of Andalusia

There are so many memorable things to do in Andalusia, many of which include the coast and historical sites within the cities. Here are some suggestions of things to do in the various areas of southern Spain.

Seville, or “Sevilla,” in Spanish, is the largest city in Andalusia. It’s often considered the heart of Andalusia.

Don’t miss visiting Plaza de Espana, a colorful plaza you’ll quickly recognize as a location that graces the cover of many guidebooks about Seville and Andalusia. Its hand-painted tiles throughout the space are the perfect photo backdrop for honeymooning newlyweds. Walking through the plaza is an experience all its own.

The Seville Cathedral (a Gothic cathedral) and Seville’s Alcazar are beautiful architectural landmarks that add to the rich history of the city.

Plaza Nueva, another well-known square in Seville, is just a six-minute walk from the General Archives of the Indies (Archivo General de Indias). This building is significant for the historical documents inside. Its interior and exterior design are also noteworthy and it is an official World Unesco Heritage site.

Seville is a great place to designate as a home base for a few days during your honeymoon and take day trips from the city center. Two great options for day trips are to 1) Ronda or 2) a combination day trip to Jerez and Cadiz with a guide.

If you drive between Seville and Ronda (a drive is less than two hours between the two without stopping), be sure to check out the well-known white villages, or Pueblos Blancos. They’re known as such because of the whitewashed building facades that stretch up to the hilltops of the countryside.

Visit El Tajo gorge in Ronda while you’re there. This is perhaps the most photographed scene in town.

Malaga and Marbella are the main cities in Costa del Sol (or “Sun Coast,” in English). The area gets sunshine almost year-round, hence its nickname.

This is a popular beach destination for many Europeans. Travelers who enjoy the coast can simply relax in the sand, or shop in Marbella, or head to places like Puerto Banus to see the sizable yachts in the marina.

Malaga is famously known as the birthplace of Picasso. Visit the Picasso Museum during your honeymoon to see some of his original paintings and learn more about this Spanish man’s life.

Granada’s Alhambra is this hillside city’s number one attraction. Its fortress history dates back to the 9th century. This fortress was later incorporated into the 13th-century palace design. It’s a UNESCO World Heritage Site and was also once the home of King Ferdinand and Queen Isabella. They lived here while another famous Spaniard, Christopher Columbus, was exploring the world in the 15th century.

Granda is a good place to see Flamenco, a style of dancing that originated in Andalusia.

Experiencing the romance of Spanish patios and small alleyways of neighborhoods in Cordoba make it a worthwhile destination to put on your honeymoon itinerary. It’s popular to sign up for a tour of the city’s gorgeous patios with a guide.

Visiting the palace-fortress of Alcazar de los Reyes Cristianos (Palace of the Christian Kings) will be a memorable honeymoon experience. Another must-see attraction here is the Great Mosque-Cathedral, a unique way to see the influence two religions have historically had on this city.

It’s easy to find most major hotel brands in Andalusia (including boutique hotels) because it’s a notorious area for tourism. You can also easily find Air BnB and VRBO options in cities here.

Here are some factors to consider when deciding where to stay in the area:

It can get extremely hot in parts of Andalusia during summer, like July and August. (It’s not uncommon for it to reach close to 100 degrees in Seville.)

You may want to avoid August altogether if you don’t like crowds; this is when Europeans flock to the coast of southern Spain for summer holidays. Some shop and restaurant owners in Seville may temporarily close their businesses during this time to avoid the heat and take a summer vacation to the beach as well.

If you wish to visit during their off-season – for a chance at the best flight and hotel prices – visit during January and February. (It is typical for temperatures during this time to be in the 60s, not quite warm enough for lounging on the beach.)

March through June, and November and October, are favorable times to visit. This is when you can expect temperatures to be in the 70s or 80s.

Honeyfund makes it easy to get started with a honeymoon registry for your trip to Andalusia. Simply start with our sample registry for the country and let friends and family help you reach this European destination. 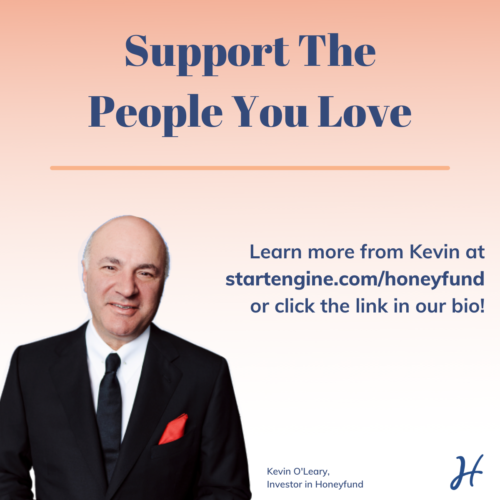