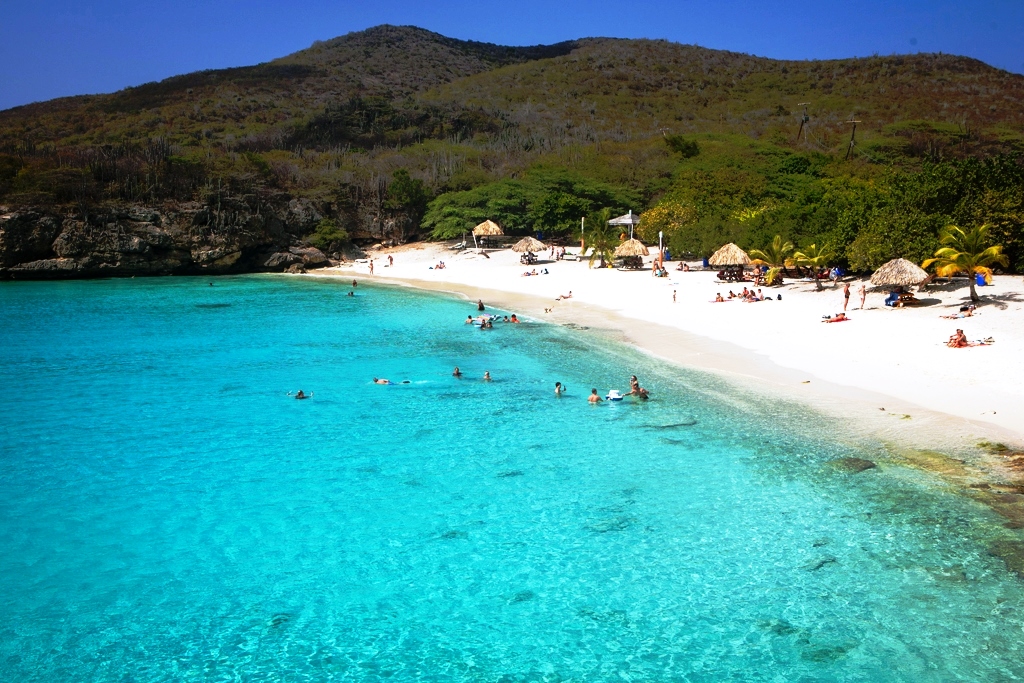 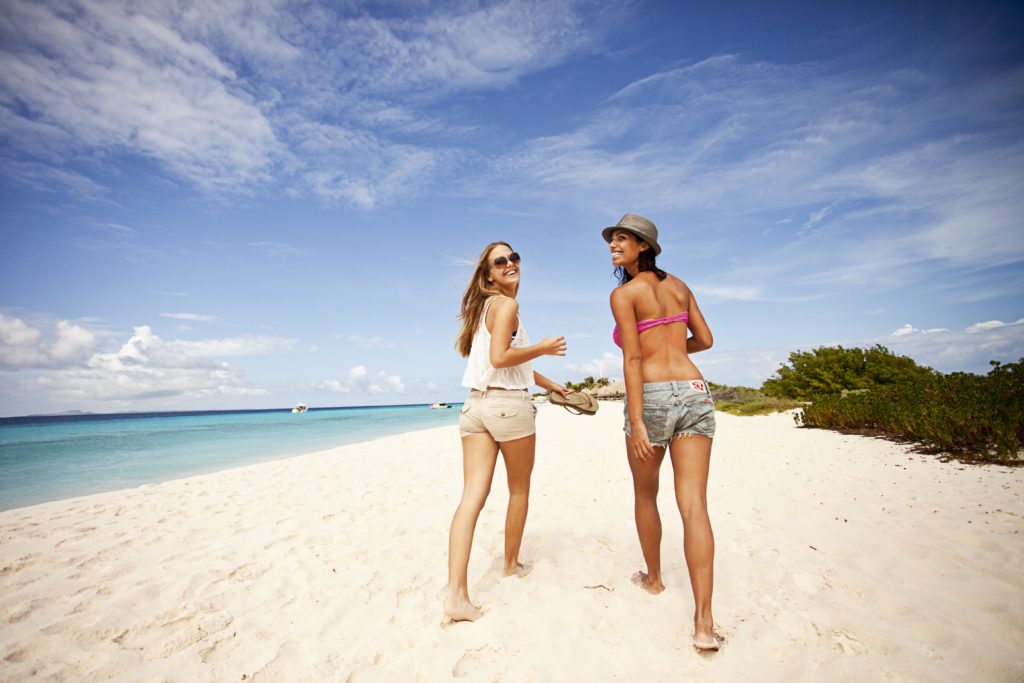 Opting for an island honeymoon brings up visions of relaxing on a beautiful beach in the Caribbean Sea. One such place we recommend is the island of Curaçao.

Some Curaçao History and Information about the Island

Curaçao is a small country that was historically part of the Netherlands, in 1816 to the 21st century. You’ll sometimes hear it referred to as part of the “ABC’s” of the Caribbean, which refers to Aruba, Bonaire, and Curaçao. In order of appearance on a map, Aruba is the west most island, with Bonaire in the east, and Curaçao in the middle.

You’ll also sometimes hear it referred to as the Netherlands Antilles, a common umbrella the Dutch government placed these dependencies under, which was absolved in 2010 (this is when Curaçao became an independent nation, yet still under the Kingdom of the Netherlands). Or, you may hear it referred to as part of the Leeward Islands in the Caribbean. Or even the Dutch Caribbean. (It’s part of a lot of geographical names!)

The northern coastline of Venezuela, South America, is only 37-miles south of Curaçao.

Its capital city is Willemstad and the island is merely 40-miles from its northwest end to its southeast end. It only takes about an hour to an hour and a half to drive around the island, no matter where you start.

Weather to Expect for your Curaçao Honeymoon

Expect its weather to be in the 80s year round, including during your honeymoon vacation. It doesn’t rain too much but expect the most rainfall from October through February, though mostly showers here and there.

Time Zone, Languages and Currency to know for your Curaçao Honeymoon

The country adheres to the Atlantic Standard Time zone and they do not observe Daylight Savings time.

Their residents speak Dutch, English and Papiamentu, which is a Spanish Creole  language consisting of some Portuguese and Dutch. It’s uniquely spoken in Curaçao, Aruba, and Bonaire.

The currency used in Curaçao is the Florin, also called the Antillean Guilder (ANG). But expect major credit cards to be accepted everywhere. The US dollar is accepted in most places as well with an exchange rate of about $1.00 USD to 1.75 ANG.

Passport, Immigration and Visa Information if You’re Traveling to Curaçao from the United States

Make sure you and your spouse have a valid passport with one blank page in it. Your passport only has to be valid for the time you’re in Curaçao, not for month afterwards like honeymooners visiting Tanzania need.

You also must have proof of a return flight, leaving Curaçao.

While you don’t need a visa unless you plan on staying for more than six months, you will need to fill out a Digital Immigration Card for customs, to enter and exit the country. It requires you to fill out simple information, including your address, name, passport and flight information, and what hotel you’ll be staying at.

Curaçao is an LGBTQ+ Friendly Nation

While same-sex marriage is not legal in Curaçao, they recognize foreign same-sex marriage. They are making strides to be welcoming to the gay community, notably with the opening of a gay center in 2010. Gay tourists should expect to be welcomed as straight couples would be.

Flights to Curaçao, your Honeymoon Destination

You’ll likely be flying to the South Caribbean for your honeymoon, as opposed to arriving by sea from a nearby island.

From NYC to CUR: $385 roundtrip, including at least one stop and about 11 hours of travel time.

Houston to CUR: $730 roundtrip, with at least one stop and about 8 hours of travel time.

LAX to CUR: $575 roundtrip, including at least one stop and about 10 hours of travel time.

You can arrange for transportation to hotels and resorts from the airport with them directly, or rent a car from one of the many internationally recognized rental car companies there.

No vaccinations in particular are needed if you’re traveling from the United States.

The country has various rules and regulations in place to help keep people safe at this destination, whether a resident or visitor. This includes things like an island curfew from 11:00pm to 6:00am. And gathering of only 4 people or less allowed. (Good thing you’ll be there as a party of two!)

You’ll have to show negative PCR test results from within 72 hours before your arrival.

If crowds don’t sound appealing for your honeymoon, try to visit during their off-peak season. This would mean choosing to visit this honeymoon destination between the months of May and November. The remaining months are peak season in Curaçao when people living in cold climates escape the weather for the tropical warmth of the Caribbean islands.

During off-peak times, you may enjoy the benefits of discounts and affordable pricing everywhere, including at a luxury resort or various hotels.

Luckily, Curaçao is outside what is considered the Caribbean “hurricane belt,” so you won’t have to worry about hurricane season when deciding exactly what dates to book for your honeymoon.

Honeymoon-Worthy Hotels and Resorts in Curaçao

Accommodations at a hotel with beach or ocean views of the Caribbean Sea won’t be hard to find here. There are plenty of honeymoon resorts on the miles of coastline in Curaçao.

Here’s a few to consider:

Couple walking down a street, enjoying the shopping. Photo by Curaçao Tourist Board, www.curacao.com.

Things to Do in this Caribbean Destination

There are plenty of activities in this small yet mighty Caribbean destination, from its beaches to resorts, to exploring their district neighborhoods.

Curaçao may be a small island, yet over 35 beaches provide a wonderful opportunity for you and your partner to dash away from honeymoon resorts and pools, and day trip to any number of coves where you have the chance to enjoy a beach all to yourselves.

Aside from enjoying beach walks, swimming to cool off from their daily warm weather, or even engaging in adventurous water sports (like jet skiing), you can explore under the surface of the ocean at over 70 dive-spots around the island.

Or, you may want to stay on land for some memorable adventures.

Walk around the Punda and Otrobanda districts, where you’ll find colorful street art, a recommendation by Cuaraçaon artist, Garrick Marchena. You can also shop for anything from tablecloths, to art, to clothing on the pedestrian-only streets of Punda, a former warehouse district.

Don’t forget to add a visit to the historic area of Willemstad to your honeymoon itinerary, both its inner city and harbor. This UNESCO World Heritage Site city has glorious architecture from the 17th century, in a style that combines Portuguese, Dutch, and Spanish influences.

Enjoy a weekend golfing at the highly rated Old Quarry Golf Course, with waterfront dining available at Boca 19 after you’ve worked up an appetite.

Cool off with a cold Netherlands Caribbean red beer at the Serbes Korsou brewery.

Curaçao has its amazing local delicacies to offer honeymooners, with its food being most heavily influenced by the Dutch.

You cannot leave the island without sampling Keshi Yena. Natives view it as the country’s signature dish. It’s basically cheese filled with, most typically,  meat and some vegetables. (Talk about Caribbean comfort food!) Look for it on menus at the restaurants you visit.

Similarly, Bitterballen and Dutch beer make for a splendid combination, which are also popular foods in The Netherlands. The seafood is always fresh and delectable, since island-living means a life with seafood.

Travelers can also try Stoba, a well known goat stew. Or, try Funchi, a cornmeal creation that’s a little like Polenta. And don’t be surprised if you see Arepas available, a traditional food from nearby Venezuela.

If you fancy a typical Curaçao drink on your honeymoon, or something to drink while you’re out sampling Curaçao nightlife, have a tropical concoction made with the island’s blue liqueur. (You may also know it by the name “Blue Curaçao.” It’s made using the dried peel of Curaçao oranges, the Laraha fruit.)

Your Honeymoon Registry for Curaçao

Make your Curaçao vacation and Caribbean Sea dreams even more of a reality with the help of a Honeyfund honeymoon registry. Beginning is easy with a starter registry. Let your family and friends gift you experiences in this tropical destination and assist with flights to get there.